The victory at Misano, in the home Grand Prix, is a big emotion. Doing that with a magistral race under the rain, without smudges, without competitors is even bigger. Today, Romano Fenati demonstrated something. The one who, last year, did not participate to this race weekend; the one who on this track, which is beautiful and complicated, turned less than other riders, the one who demonstrated to be the strongest Italian rider of his class. First victory and second podium at Misano for him. Jules Danilo was doing a great race, by recovering many positions when another rider crashed in front of him. French rider crashed too in the attempt to avoid him.

Romano Fenati: "Today the bike was really fast, I had a great feeling which allowed me to enjoy the race. This is a special victory for me, my team and for all the supporters. The Italian hymn here is a unique emotion".

Jules Danilo: “Today I was doing a good race. Controlling the bike in these conditions was very difficult but, after having overtaken many riders, I felt very comfortable on the bike and my pace was really good. Unfortunately Antonelli crashed in front of me and, in the attempt to avoid him, I crashed too. It's a shame but we have to look forward". 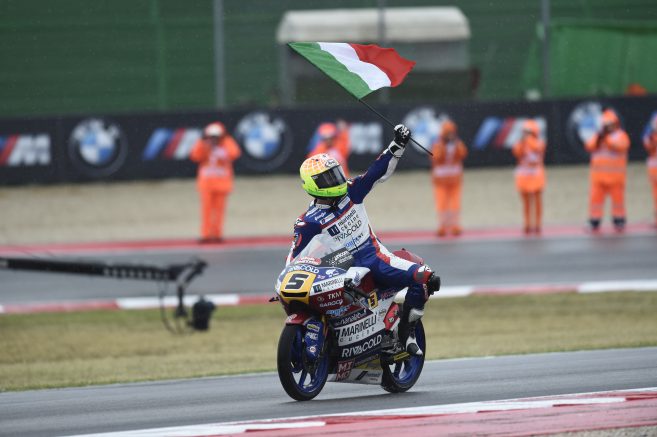